On the initiative of our President Roberto Maculan we decided to make a reconnaissance trip to bring the items collected by the foundation MAMRE of Turin and the many donations received, get first-hand information and set up a logistic plan for concrete interventions.

They left their home countries where they had no prospects for the future and reached what they considered the mirage of paradise: Europe. 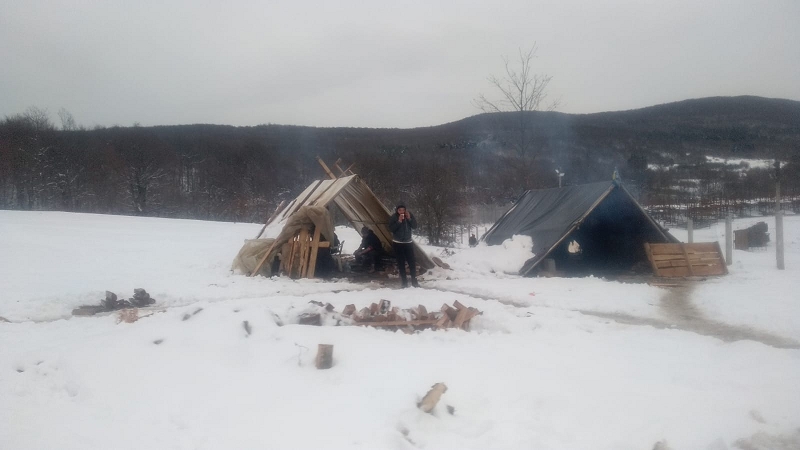 The group led by Roberto, accompanied by Claudia, by a representative of the Turin Association "Pausa caffè" and the photo reporter Claudio Silighini, left the headquarters in Carrè on the morning of 26th January.

Another important objective of this mission was to act as a pathfinder for the truck that was traveling behind us with the load of clothing and food that we wanted to distribute in the refugee camps.

After a two-day road trip, hours spent in customs, some excursions in the woods and in the snow, after several meetings with other associations that already work on site (Red Cross, Civil Protection, local authorities) we were able to get an idea of the logistic situation. We visited some makeshift shelters where migrants live since a fire burned down their camp. We witnessed with our own eyes the desperate conditions in which they are forced to live and heard their testimonies. They told us that they keep hoping that they will manage to enter Europe. No protection, no proper clothing is given to these migrants. They are left alone, hungry and without basic medical care. On the way home we made up our mind very clearly: We can no longer wait; we must act immediately.

Do your part... it is not just a matter of clothing and food


A chain of expensive logistics services for the selection, packaging, transport, and distribution of the goods collected is needed. During our first mission we understood that the best way to feed these people is not to transport foodstuffs for hundreds of kilometers but rather to buy them locally. Doing so we can not only help the migrants, but also the local economy. At the same time, purchasing food from local shops improves the attitude of the population towards the sad phenomenon of migration.

SUPPORT US WITH A DONATION

What you can do to help


There are many ways to support us, all of which are important for us and for those we meet in our journeys.